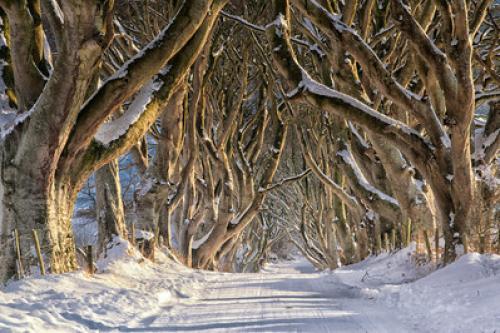 Northern Ireland is the real-life home of Westeros seen in the Game of Thrones®. Visit spectacular sites from the show by car or experience a private guide luxury coach trip with Giant Tours Ireland - Flip was a stand-in actor for Hodor on set and will pick you up from Blackrock for a day excursion full of stories from behind the scenes.

Game of Thrones Terriroty Near Blackrock

The Dark Hedges, an avenue of 18th century beech trees more familiar to fans as the King's Road where Arya Stark escaped in horse and cart dressed as a boy with the Nights Watch.

The Stormlands filmed at 400year old Cushendun Caves. Found along the Antrim coastline, near the cosy village of Cushendun, its where Melisandre summons her shadowy demon beneath Renly's Camp.

Murlough Bay, home to Slavers Bay! This stunning stretch of shoreline along Northern Ireland's Causeway Coastal Route is where Tyrion Lannister ran into slavers on his way to Meereen.

Take in breath-taking vista on top of Dragonstone Cliffs locally know as Fair Head. Gaze out over the stormy seas and picture Jon Snowâ€™s intriguing encounter with Daenerys and her dragon.

Ballintoy Beach and Harbour is a picturesque port also known as Pyke, home of the Ironborn. This is where Theon Greyjoy arrives in the capital of Lordsport. Nearby, Ballintoy Beach is where Euron Greyjoy is drowned to become the king of the Iron Islands.
Swing out over the open ocean at the Carrick-a-Rede Rope Bridge. Fans will spot nearby Larrybane quarry. This picturesque spot featured in season two when Catelyn Stark first met Renly Baratheon.

Portstewart Strand is two miles of golden sands and gentle lapping waves. It was here among the huge sand dunes, that Jaime found himself captured by Dornish soldiers, and where Ellaria and the Sand Snakes conspired to start a war with the Lannisters.
Downhill Beach is a stretch of spotless white sands, overlooked by Mussenden Temple, a replica of the Temple of Vesta in Rome. This is where Stannis Baratheon rejects the seven old gods of Westeros and is proclaimed champion of the Lord of Light by Melisandre
Binevenagh mountain is where Daenerys and her dragon Drogon find refuge in the Dothraki Grasslands. The mountain itself marks the edge of the Antrim plateau, looking out over County Armagh and County Londonderry. Walking trails and panoramic views stretch for miles.